What is God’s Grace?

I remember hearing my parents, other people, and even I have used and use phrases like, “If it weren’t for the grace of God, I don’t know where I’d be; I would be dead; I’d be lost; I’d be out of my mind, just crazy; I wouldn’t have made it through sickness, divorce, college, or through terrible times; Because of God’s grace towards me, I got a job, car, or home that I didn’t qualify for and so on”.

However lately, I have heard numerous of sermons about grace, and not all but, most have vexed my spirit in a manner that led me to investigate grace in which the Bible speaks of and it’s meaning. Many think grace is just for New Testament (NT) believers; some say grace doesn’t allow a ramification for sin; some say grace covers a sinful lifestyle without punishment; some say grace is acceptance of sin; some say God is not angry with sin because we are living under grace; Things that make you say “mmmmmm”.

To understand grace, I started off with the question, what does “Grace” means and examined its connotations.

In the New Testament (NT) grace is a Greek word, charis [khä’-rēs], which means the following:

First, God’s grace is more than favor bestowed upon mankind, and God does get angry with us when we sin and because we sin. He was anger with the people of Noah times because of their grave sins and flooded the whole earth (Genesis 6); He was angry with the people in Sodom and Gomorrah for their treacherous sins and destroyed these cities (Genesis 19); He was angry at Israel because Achan had stolen accursed things and he, all his family, cattle and all he had were stoned to death (Joshua 7); He was angry with King David for doing a census of people and punished Israel (1 Chronicles 21), He was angry with King Saul and Saul lost his position as king (1 Samuel 15), and so on. There are so many Scriptures in the Bible that speak of God being angry with people rather saints or sinners, His people or the world’s, and then He pays them according to their sin. The woman caught in adultery was not stoned to death as law required, because Jesus bestowed grace upon her and commanded her to live righteous (repent) from that point on (John 8). Gratefully, God demonstrated his grace in each of these situations as He did not give them what their sin required and for us assuredly, we never get the fullness of what we earn because of His grace (mercy). Psalm 103:8-10 says,

8 The Lord is merciful and gracious, slow to anger, and plenteous in mercy.

9 He will not always chide (reprimand, rebuke, reproach, blame): neither will he keep his anger for ever.

10 He hath not dealt with us after our sins; nor rewarded us according to our iniquities.

11 For as the heaven is high above the earth, so great is his mercy toward them that fear him.

12 As far as the east is from the west, so far hath he removed our transgressions from us.

13 Like as a father pitieth his children, so the Lord pitieth them that fear him.

What does this mean? God provided grace to “soften the blow” or extent/degree of the punishment due to sympathize with and show mercy to us. When the law determines that we should receive death or other harsh punishment, grace steps in as a buffer and gives us time to repent, stop sinning, and live righteous. Grace also gives us divine ability and strength to resist our proclivities/sins and is why His grace is sufficient for us (2 Corinthians 12:9).

Some want to use certain verses from chapters three, five, and six of the book of Romans as an excuse to sin and continue in sin and use the following Scriptures as blanket to justify their life style or sin:

We all sin and fall short of the glory of God

This verse is letting us know that we, no one, is perfect and will sin, but God will show his (grace) pity, mercy, compassion towards us, give us strength to endure, and the ability to deny/resist our fleshly desires especially as we mature and increase in the knowledge of Christ Jesus.

Moreover the law entered, that the offence might abound. But where sin abounded, grace did much more abound:

This verse is saying that the law puts a spotlight on sin, but grace is there to spotlight God’s loving-kindness in that we don’t receive the “full price or payment” for our sin. Where as the law demands a certain and particular outcome for sin, grace says I won’t allow complete retribution, but will limit the degree of punishment. (Praise Break – Hallelujah Thank You Jesus). Do not be deceived, God is not mocked; for whatever a man sows, that he will also reap (Gal. 6:7). Grace covers what we deserve – it helps us to not get what we earn, but doesn’t exempt punishment or as some like to say, “consequence”.

God did not do away with the law; he fulfilled it through Jesus (Matthew 5:17) so that we could live under grace (i.e. we are able to live through Christ’s life). Over and over Jesus says to obey him and to keep his commandments (Matthew 19:16, John 14:15, Romans 7:12, 22, 1 Corinthians 7:19, and so many more). When we allow Jesus to live through us, the Holy Spirit convicts us; He lets us know we are sinning or that we are treading on thin water and about to sin; He informs us of the right thing to do and what’s acceptable to God; Hebrews 13:4 tells us that God will judge (inflict penalty on) us for defiling the marriage bed. He even lets us know that punishment will come if we sin (John16:8), but because of Jesus, the Lamb of God who was slain for the sin of the world (John 1:29), because of Jesus’ shed blood that continuously cleanses us (1 John 1:9), the penalty of the law is lightened. Jesus Christ’s act of redemption is the Spirit of Grace at work.

For sin shall not have dominion over you: for ye are not under the law, but under grace.

This verse is saying that sin does not have reign over a believer’s life because of grace – Here, the meaning of grace is God’s divine/holy influence upon the heart that sustains and gives us the ability and strength to live righteous and that the full execution of the law is restrained not abolished.

Here, under means of situation, position, tarrying: subject to the power of, any person or thing

We are not under the execution or power of the law, which renders a stringent, strict, stern, rigorous, harsh, dogmatic punishment, but are subjective to a higher power of grace, which demonstrates God’s love, mitigation, and lessening of the exact punishment that the law mandates and requires.

People often read snippets of verses and not the full context. Paul even says in previous verses in Romans 6:1-2 that we shouldn’t continue to sin because of the abundance of grace or to make grace increase, and later in that same chapter, he also says that the wages (payment) of sin is death, but the gift of God is eternal life through Christ Jesus our Lord (Romans 6:23) which means that by law, our sins require a death sentence or other punishment, but God provided life for us through Christ and His life provides grace.

God’s grace was definitely present during Old Testament (OT) times. Zechariah 12:10 speaks of the Spirit of Grace. Oftentimes, Israel would sin and God would warn them and give them chances to stop rebelling and repent. He would be longsuffering with them but he still would render a merciful penalty, correction, and judgment. The judgment wouldn’t be as severe as it should have been – he showed pity. Even as Jeremiah 10:24 says: O Lord, correct me, but with judgment (sentence, law, execution of judgment); not in thine anger, lest thou bring me to nothing. OT law had a verdict that was executed immediately or soon thereafter by death (i.e. stoning, burning, decapitation, and strangulation), excommunication, curse, or loss of a body part (which ever caused the offence). Jeremiah 46:28 say, “Fear thou not, O Jacob my servant, saith the LORD: for I am with thee; for I will make a full end of all the nations whither I have driven thee: but I will not make a full end of thee, but correct thee in measure; yet will I not leave thee wholly unpunished.” Here, God allowed Israel to go into captivity under the rule of a heathen nation and receive cruel punishment (to rightly correct). However, God rendered justice to Israel for the harsh treatment rendered by heathen nation – He paid the heathen nation for their cruelty.

The conclusion is this…

© 2018 J. Renee All Rights Reserved.Website designed by TruGfx.com
Contact Us

We're not around right now. But you can send us an email and we'll get back to you, asap. 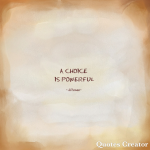 A CHOICE IS POWERFULBlog, Can We Talk